Landmines are down. Russian troops are on the ground in Crimea, and mobilizing on the border with Ukraine. “If Russia does establish facts on the ground that increase tensions or that threaten the Ukrainian people, then… there will be costs,” warned U.S. Secretary of State, John Kerry, after a meeting with Russian Foreign Minister, Sergei Lavrov, in London, Friday.

There’s no other way to put it, other than the way former Secretary of Defense, Robert Gates said it on Fox News Sunday. “I do not believe… that Crimea will slip out of Russia’s hands.”

The Republicans love it, because, in their eyes, he’s pointing to a foreign policy weakness of the Obama administration, namely, that Barack Obama is not assertive enough against a tyrant like Vladimir Putin. Indeed, their rhetoric suggests they wish he was more like the Russian leader. “That’s a leader,” lamented former New York mayor, Rudy Giuliani, of the Russian despot. That’s quite ironic, since their vitriolic base already considers Obama a tyrant, on par with Hitler. He’s either Hitler or Neville Chamberlain, sometimes both. They can’t seem to make up their minds.

But what the hell could our president do, under these circumstances? As Sec. Gates put it, “Our tactical options are pretty limited.”

The hawks like to point to our refusal to bomb Syria after the regime used chemical weapons, and the administration’s slowness to send arms to the anti-Assad forces, as a sort of green light to Putin. As Gates pointed out, “[E]ven if we had launched attacks in Syria, I think Putin saw an opportunity here in Crimea, and he has seized it.”

“I don’t think Putin needs to respond to weakness. He’s just the bastard he is,” observed author Salman Rushdie, on Real Time, with Bill Maher, Friday.

Republicans also reveled in the media replaying former presidential candidate, Mitt Romney’s insistence, during the 2012 campaign, that Russia is America’s “number one geopolitical foe,” calling the statement both accurate and prescient. But like most rhetoric the GOP puts out there, it was from their smug perspective of moral relativism. They ignore the key phrase, which President Obama rightly pointed out, that Russia is not the “number one” global threat to the United States. As the commander-in-chief rightly stated, we are in far greater danger from extremist terrorism than we are from Putin. 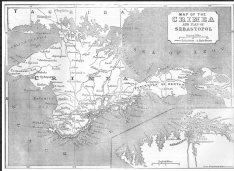 The Russian leader acted because he does not want the strategic peninsula to fall into the hands of the European Union, or even worse, NATO. So he aggressively crossed the narrow, Kerch Strait, which separates Russia from the peninsula by a much shorter distance than Putin’s federation is from Sarah Palin’s house.

It’s not like the Pentagon could have sent the US Navy into the parts of the Black Sea that are not part of Russian territorial waters, to protect the western side of the Crimean peninsula from the Russians sending their ships, because the Russians have a fleet of ships already in Crimea – the Black Sea Fleet. Surrounding Crimea to the west would have meant blockading Russian ships, too. Then, they really would have had a legitimate claim on their interests being threatened.

Any military response on our part would not result in the proxy wars of the Cold War era. There is no organized resistance against the Russians in Crimea for us to arm. It would be World War Three.

Think of it like the 1962 Cuban Missile Crisis, but instead of the US sending ships to surround Cuba, Khrushchev would have sent ships into the Florida Straits to protect Castro’s regime. We wouldn’t have stood for that, and we had definite U.S. military interests in Cuba, in Guantanamo Bay, since 1903.

The United States has no defense pact with the Ukraine, only with her NATO member neighbors on the Baltic – Latvia, Lithuania and Estonia – and Poland. Not only are we not compelled to act by treaty, we cannot send forces into Ukraine without their asking, and they haven’t asked.

What they have asked for, and what we can genuinely provide, is money. According to CNN Money, their situation is dire:

“The European Union says it will offer Ukraine at least $15 billion (€11 billion) in aid. The U.S. government has also stepped in to help, offering $1 billion in loan guarantees.

Our only response, and it may be the inevitable one, is sanctions. But given the intransigence of Putin’s devotees combined with Republicans in the United States Congress who are conflagrating World Bank reforms with an aid package for the fledgeling Ukraine governing coalition, it appears there will be no action to stem Russia’s perceived aggression until at least after Sunday’s Crimean referendum. That’s when the separatist territory will decide whether to become an independent country or join the cultural Russian majority with the motherland.

“I presented a number of ideas on behalf of the President, which we believe absolutely could provide a path forward for all the parties,” Sec. Kerry told the world press, Friday, “However, after much discussion, the Foreign Minister made it clear that President Putin is not prepared to make any decision regarding Ukraine until after the referendum on Sunday.”

And as far as sanctions go, the EU is beholden to Russia as a trading partner and an energy supplier, and any quid pro quo from Putin could leave them reeling, just as their economy was starting to come back. “Analysts say Russia would be the ultimate loser of any prolonged trade war,” CNN reported this week, “but European exporters and investors would suffer too.”

Foreign ministers from the EU countries are scheduled to meet in Brussels, Monday, following the Crimean referendum and the Russian reaction. After the London talks between Kerry an Lavrov failed to produce a diplomatic solution, Britain’s foreign secretary, William Hague, said he was urging “a firm and united response from the EU at the meeting of the Foreign Affairs Council Monday and that the time has come for tougher restrictive measures.”

When asked about U.S. and European sanctions, Friday, Kerry insisted, “I think that’ll have an impact.”

One thought on “Losing Crimea to a ‘bastard’”