“New Year’s Eve is fast approaching, and for decades and decades, the American people have watched the ball drop in Times Square. But this year, Mr. President, the American people are waiting for the ball to drop, but it’s not going to be a good drop.”
– Senate Majority Leader, Harry Reid (D-NV), in a floor speech, Thursday, about our government’s inability to pick up the ball on the so-called ‘Fiscal Cliff’

It’s been awhile since Congress had any fortitude, when it comes to passing important legislation. It’s as if there were a fear of herniating themselves if they do too much heavy lifting during a term. Even Obamacare had to be cobbled together and shoehorned through because our elected representatives were afraid of the backlash from conservative, big money backers, and the throngs of screaming hayseeds they sponsored.

In both chambers, the lack of ability to think outside of the reelect-me box has frightened enough Senators and Representatives that the halls of the U.S. Capitol echo with the shrill voices of reactionaries and obstructionists, screaming about minutia and ignoring the hard work at hand. They’ve entrusted their convictions to the monied special interests and angry extremists, who promised to carry the ball for the reelection campaign, as their share of the exchange – a Devil’s deal for the nation’s soul, to be sure.

Many legislators, with a history of putting their strong beliefs on the table and compromising across the aisle, decided they would rather quit than be stained by having been a member of Congress during some of its most contentiously uncompromising terms. 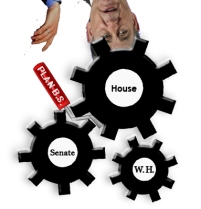 Witness Republican Speaker of the House, John Boehner’s reaction to the difficulty of the situation. Obsessed with the notion of having the votes of a majority of the House GOP majority for a Fiscal Cliff deal, with the end nigh, and narrowing space between his offer and that of the White House, the frightened and ineffective Boehner pulled back, and wasted five days on Plan Bullshit, before sending the House home for Christmas. Those who promised him they would pick up the ball he drops are telling him that this is a winning strategy, politically. They must be the same people who kept assuring Romney campaign that they were going to win the election.

As Rick Ungar wrote, in Forbes magazine, after Boehner’s failed Plan B vote:

“The entire ploy was nothing more than pretend legislation designed to embarrass Obama into offering up more cuts in the Plan A negotiations.”

Extremists in both parties cheer and rally for their respective sides to hold tightly to their “convictions.” They call it a true measure of power, and it may be, for even something as small as a dropped screwdriver can shut down a factory and keep it from being productive. But it doesn’t even rattle the scale when it comes to measuring good governing, putting the interest of the nation above that of a few wealthy men and entrenched industry lobbyists. Besides, it seems to me that if you’re the one who dropped the screwdriver, it’s not the screwdriver who gets fired. It’s you.