“[W]hen you compare these people with tea partiers—now you’ve got a problem with We the People.”
–  Web posting from Tea Party Patriots to its local groups, Tuesday, October 11, 2011

They’re offended. They’ve got a problem. They’re using exclamation points. The longer Occupy Wall Street, and its nationwide inspired clones, continue their protests, the more vociferous the right’s opposition is getting. The Tea Party just does not get the Occupy movement. They don’t get that it is an actual grassroots movement, in the dirt, at the root level, and not the grass of a manicured, suburban lawn, cared for by gardeners who have been hired by big banks and John Birchers like the Koch brothers.

It only makes sense that in trying to voice opposition to Occupy, the radical right has resorted to categorizing the participants in anarchistic memes. “[W]atch us keep owning Teamsters and Hippies,” invites one right wing video website.

“Whenever I hear somebody call me a hippy, I just write it off as ignorance, because that’s a term that’s no longer 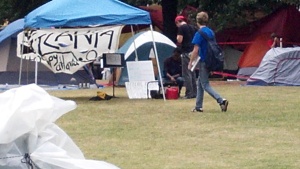 relevant,” said Kate, an Atlanta teacher and community organizer, who spent Thursday evening helping feed those camping at Occupy Atlanta, in Woodruff Park, in the heart of the city’s downtown business district.

“I have very little respect for people who try to take down someone else whose trying to do some good work,” she insists. Still, she says there is commonality among the Occupy and Tea Party movements. “The people I’ve spoken to from the Tea Party are interested in community work, and we may not agree on all of our political points, but I have respect for people who are trying to go out into the community and engage with their neighbors.”

A young web designer at the Occupy Atlanta site, named Ginsen, seemed to agree. “Overall, I support any sort of passion for people to change something they don’t believe is right,” she said, after setting aside the Hula Hoop she had been swaying around in.

Tea Party groups, however, see it much differently, feeling their organized, political message trumps any semblance of credibility Occupy participants think they have. “Tea partiers usually have informed opinions and clear articulation of their principles and goals,” claims the Tea Party Express. “The socialist mobs sitting around in NYC rely on mind-numbing chants, bongo drums and bullhorns, because there is no substance to their message.”

But Kate, the teacher, sees that as a plus. “Politics is not relevant on the grassroots,” she said. “What’s relevant here, is that people are coming together, on a very personal level. You can ask people here. You don’t see big non-profits, with a big presence; you don’t see labor organizations; you don’t see the Tea Party. You see people, and that, to me, is what grassroots organizing is. When you get politics involved, that is when it loses that people power.”

Harrison Schultz, an activist participating in Occupy Wall Street, told Politico much the same thing. “This is not a political movement, this is a social movement,” he said.

But the Tea Party groups see the politics as proof of their power, particularly after the 2010 Congressional elections. “Occupy Wall Street may someday become a significant force in American politics, but they’re certainly not today,” said Mark Meckler, co-founder of the Tea Party Patriots, according to the Politico article.

Ned Ryun, president of American Majority, a group that trains tea party activists, told Politico that he’s not too worried about Occupy protesters becoming a force. “The more you read about [them] and their behavior,” he insisted, “the more it looks like they’ll implode on their own.”

In Atlanta, Ginsen seemed unfazed by the actions and threats of Tea Party and other right wing activists. “We can handle a little bit of push back. It’s okay,” she said, matter of factly. “In the end, if they push back, we’ll push harder.”

And while Ryun doesn’t seem to take the Occupy protesters seriously, the more strident Tea Party Express had a different characterization of the Americans participating in the Occupy movement. “They are a disorganized unruly mob of shiftless protestors that has been reinforced by union and organized labor thugs,” said Amy Kremer, in her letter to supporters, asking for donations.

Ginsen indicated that she believed that was nothing but partisan hype. “When you see girls with Hula Hoops, it’s kind of hard to think we’re a bunch of union organizers here,” she said. “I mean, c’mon. Do we look like we’re part of a union?”

2 thoughts on “Occupy – Grassroots, at the root level”