The gears have turned; the motor is unveiled. With their riches, the Kochs have built a politi-mechanical juggernaut. Emerging from the camouflage of American tri-color heaped on it by the adoring, paranoid masses, it is as impossible to ignore as a car wreck. Like a John Birch Red Menace, Daddy Koch’s Machiavellian mania has released the agents of a new, darker American ideal. Fed with the souls of middle class workers who voted against their best interests in record numbers last year, they must have realized that it was time for the trap to be sprung.

According to Think Progress, “Much of [Wisconsin Gov. Scott] Walker’s critical political support can be credited to a network of right-wing fronts and astroturf groups in Wisconsin supported largely by a single foundation in Milwaukee: the Lynde and Harry Bradley Foundation.” 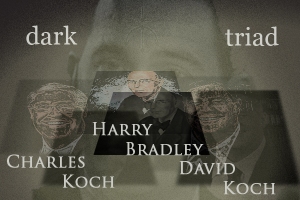 Michael Grebe, the CEO of the Bradley Foundation, the large walleted legacy of a John Birch Society co-founder, ran Walker’s transition team. The Koch Brothers – who have significant holdings in Wisconsin – were among the top five donors to his campaign. With financial help from them, and money and logistical support from the ultra-conservative Bradley-ites, Walker assisted in the deceit and manipulation of the Wisconsin electorate. While deceptive politicians are pretty much the norm across the US’ political landscape, this was an old fashioned con – a bait and switch.

The card played from Gov. Scott Walker’s hand was certainly a surprise to the unions who supported him during the election. “The new administration never attempted to start discussions with the WLEA Bargaining Team or any other bargaining unit. They just dropped the bomb on all of the public employee unions,” asserts the Wisconsin Law Enforcement Association, in a recent statement.

“When he was Candidate Walker, he never talked publicly about union dismantling during the campaign. As Governor Elect Walker,” the WLEA continues, “he brought the subject up publicly during a luncheon at the Milwaukee Press Club on December 7, 2010. His anti-union stance wasn’t a surprise, but the introduction of this radical change caught many people off guard, including people who actually voted for him during the election.”

Who gains from this deceit? Well, Walker, of course – he gets to be governor – but the biggest winners are the largely anti-union forces who support him. They are the selfish, narcissistic elitists who don’t care for the plight of the workers, who care only for how to make a product as cheaply and unregulated as possible. They are, by their own admission, anti-social – pathologically lacking empathy for the needs of the community, are not ashamed to say, instead, that the country owes the 2% of them much more than it owes the rest of us.

They don’t really love America – that would require loving all the people and classes that make America wonderful. They love what America gives them, and they have no qualms about pushing the rest of us out of the way to get it. Sure, they can be charming and intelligent, but they are wooing us into darkness. In the rock-paper-scissors game of life, they are the crushing rock.

But be confident, brave and keep fighting, because the good people in Madison, Wisconsin, and everywhere else in this country, are the paper – the one that starts “We the people…”