Citizens line up at the ballot box, and as they shuffle by Uncle Sam’s hat laying upside down on a table, they drop their votes inside. Outside the building, where hopeful voters queue up politely, there are yard signs stuck in the wet grass of the right-of-way. “Vote against your own self-interest,” says one. “A vote for me is money for me,” says another, above a Congressional candidate’s grinning head shot. “Smith for Senate,” says a third, with the line, “She puts corporate interest ahead of the people’s.”

Back inside, Uncle Sam sits, hatless, at a small plastic folding table, his long, striped trouser legs stretched out in front of him, ending with his feet on the table’s mottled, white surface. In his hands, he holds the Sunday crossword, a pastime until the voting is finished.

The voters filing in walk right by him, and it comforts them, somehow, to know that this election process takes place under his watchful, grandfatherly eyes. They are thrilled when he momentarily glances up from his preoccupation and gives them a little wink and smile. It warms them down to their red, white and blue souls that they are being acknowledged as good citizens. This patriotic fervor is very exciting, but while they are distracted by all the heartfelt flag waving, something is going on behind Uncle Sam’s back. 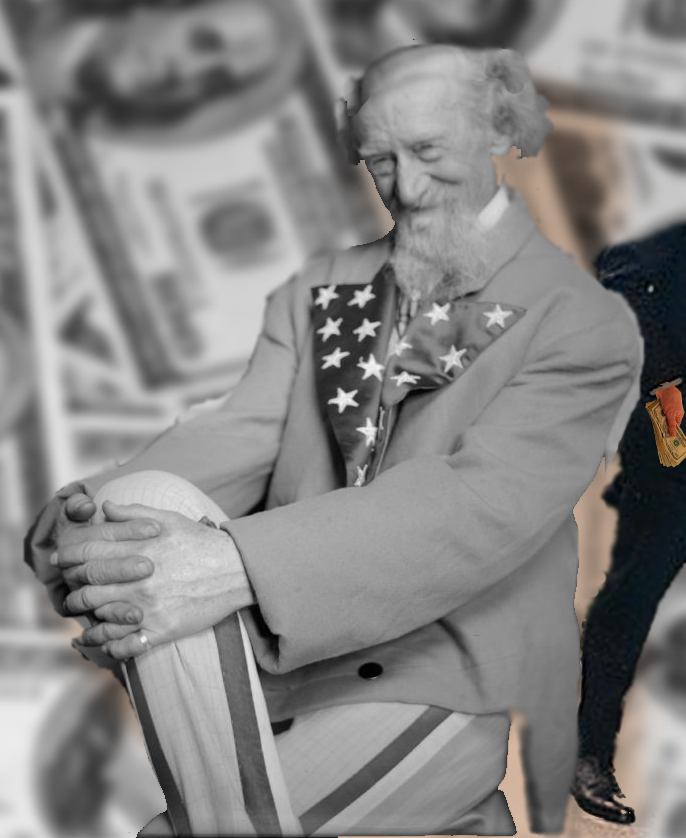 As votes are dropped into the hat, money begins to pile up on his side of the table. He’s too involved in his crossword to notice it, but soon, the candidates, putting on a good show of playing their parts as citizens, are picking up the piles of cash on their way to Washington, DC, some with wheelbarrows.

That is their money. The Supreme Court blessed corporate persons, for whom money is speech, promised it too them, rather loudly and garishly, in exchange for their undying support. It’s the way things work, in the corrupt institution we call Congress.

The cycle of money, power and favors in Washington, DC,  takes place inside a black box, as the Institute for Policy Studies‘ Sanho Tree described it during a summit on corporatism a couple of weeks ago, with a visible head (the president) on top, and the sausage legislation being extruded on the other side. Franklin C. “Chuck” Spinney, a former Department of Defense analyst, told those at the Movement for the People Summit that this system is commonly known as the “Iron Triangle,” which is the closed, three-sided system of “the Pentagon, defense firms and members of Congress [and their staffs] who shill for the contractors.” (Bulletin of the Atomic Scientists, Nov. 1998, p. 15) 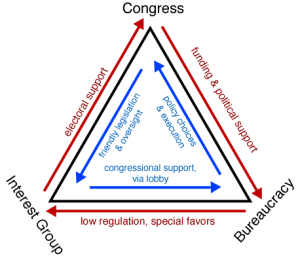 “At one corner of the triangle are interest groups (constituencies). These are the powerful interests groups that influence Congressional votes in their favor and can sufficiently influence the re-election of a member of Congress in return for supporting their programs. At another corner sit members of Congress who also seek to align themselves with a constituency for political and electoral support. These congressional members support legislation that advances the interest group’s agenda. Occupying the third corner of the triangle are bureaucrats [those who work in the FCC, EPA, FDA, etc.], who are often pressured by the same powerful interest groups their agency is designated to regulate. The result is a three-way, stable alliance that is sometimes called a subgovernment because of its durability, impregnability, and power to determine policy.”

This is essentially the “military industrial complex” President Eisenhower famously warned us of fifty years ago in his farewell speech. More to the point, Spinner revealed, Ike’s speech originally said “the military industrial Congressional complex,”  but the general did not want to offend Congress, so he struck it. (This was asserted by Eisenhower’s children, according to SourceWatch, and has been subsequently confirmed.)

But I often find the actions of Congress pretty offensive, so I’m not afraid of offending them. Are you? I mean, the Senate’s refusal to change the filibuster rules last week is emblematic of maintaining the concentration of power status quo. The majority will only bring things to the floor what they know the opposition will not stop, which means that unless some relatively moderate GOP Senators distance themselves from the growing far right of their party, nothing will get done for the next two years.