So it wasn’t the trip to the altar she was expecting, nor the kind of sacrifice she wanted to make for love. I guess leaving blood on a Satanic altar is one way to lose your virginity. No wonder why the woman thinks lust is evil. To her, a penis is the same as a pitchfork. 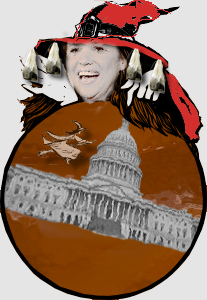 But before we dismiss the crack-tea-pottery of Christine O’Donnell, let’s keep in mind that the more a mama grizzly is cornered, the harder she scratches, especially when her cubbette is in trouble. She may be hiding behind Palin’s skirts, but like Yosemite tourists behaving badly, the tea baggers will just keep leaving more food for the bears. The more resources they consume, the stronger they get; the harder they fight.

What killed Rep. Mike Castle in Delaware’s Republican primary last week was low voter turnout. The caution expressed in this column after O’Donnell’s den-mate, Rand Paul, won in Kentucky still holds true. We cannot say these people are unelectable, because they managed to get elected. So the only way we can get these folks out of politics is to vote them out, defensively. They may be clawing out only a small, conservative corner of the electorate, but they are noisy and get all the attention. Only the rational sanity of the majority of Americans showing up to vote can upstage the Tea Party spectacle.

So when Bill Maher reveals he has intercepted O’Donnell’s owl-borne invitation to Hogwarts, we can laugh, but make sure you’re guffawing all the way to the voting booth, that you’re tittering as you present your voter ID, that you’re snickering when you see Diebold across the voting screen, then just let your belly explode with laughter when you vote against these people. That way, when it’s morning in America, it won’t look as dark as the long, Alaskan winter night.